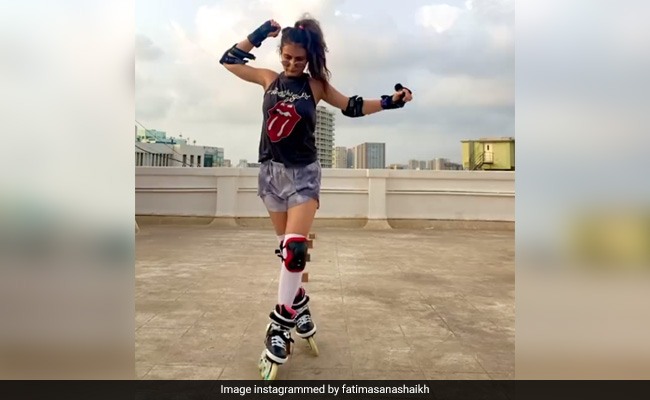 Fatima Sana Shaikh in a still from her video (courtesy fatimasanashaikh )

Fatima Sana Shaikh is always trying something new – there’s proof on her Instagram. The 29-year-old actress‘ latest hobby is to perfect certain skating skills with some help from YouTube. But it wasn’t a smooth ride for Fatima, who can be seen losing her balance and falling down in the video montage. But Fatima being Fatima, didn’t give up, cherished the joy of learning and eventually picked up a few skating tricks. Sharing the skating video, Fatima wrote: “Trying to learn some tricks through YouTube. I keep falling, tripping, but the satisfaction of getting at least one trick right, is unmeasurable.” Fatima’s skating skills were cheered on by the likes of Sobhita Dhulipala and Siddhant Chaturvedi in the comments section.

Fatima Sana Shaikh stars in the Netflix anthology Ajeeb Daastaans, which premiered on Netflix in April. Fatima recently revealed that because of the pandemic situation, her current work status is “unemployed” but she’s looking forward to bounce back soon. “Abhi toh jab COVID thoda kam ho jayega, khatam ho jayega, jaise sabko kaam milega, waise mujhe bhi milega. Abhi berozgaar baithe hain (Once the COVID situation settles and when everyone starts getting work, I will get work as well. Right now, I am unemployed),” she told a curious paparazzo.

Fatima Sana Shaikh is best known for her role in Dangal. She has also starred in films such as Thugs OF Hindostan and Suraj Pe Mangal Bhari and was last seen in Ludo. Fatima Sana Shaikh is expected to co-star with Anil Kapoor in an upcoming movie, for which they were in Rajasthan earlier this year.